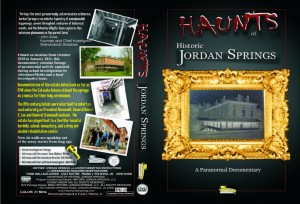 Since 2008, John Rossi, chief investigator of Shenandoah Shadows and Director of Paranormal Events at Historic Jordan Springs has done extensive paranormal investigations of the building and the Devil’s Backbone and leads Paranormal Investigation Tours, as well as Overnight Investigations at the resort. These tours may also include a meet and greet in the pub, a multi-course dinner, a brief paranormal presentation, a 2-hour guided investigation and a debriefing and review of evidence from the last investigation. One technique John uses is recording EVPs (electronic voice phenomena). John said:

“This is the most EVP-active location I have ever been in. Many psychics have suggested that Jordan Springs is a portal. Over the years, we have had contact with dozens of spirits ranging from Native Americans, Civil War soldiers, Civil War nurses, various adult male, female and children spirits, of different time periods.”

One of the most intriguing ghosts in the building is that of a little girl who likes to play games. She is seen by many visitors in the main attic. Her favorite game is hide and seek. Listen to the EVP recording where John asks her if she wants to play hide and seek. A little girl’s voice can be clearly heard saying, “Seeeeek!” In the grotto, which is part of the Devil’s Backbone formation and where the cold water sulfur springs are located, EVPs have been captured in Native American language. John reports that this is the only area of the property which feels unsettled, and he speculates that since the grotto was a spiritual site used by both Native Americans and later Catholics when it was a monastery, a bit of spiritual disharmony is taking place.